Introduction First Published In: 1923. This book, which is Gibran's masterpiece, has become one of the beloved classics of our time.

Published in 1923, it has been translated into more than twenty languages, and the American editions alone have sold more than nine million copies.

Gibran considered The Prophet his greatest achievement. He said: "I think I've never been without The Prophet since I first conceived the book back in Mount Lebanon.

It seems to have been a part of me... I kept the manuscript four years before I delivered it over to my publisher because I wanted to be sure, I wanted to be very sure, that every word of it was the very best I had to offer."

The Chicago Post said of The Prophet: "Cadenced and vibrant with feeling, the words of Kahlil Gibran bring to one's ears the majestic rhythm of Ecclesiastes...

If there is a man or woman who can read this book without a quiet acceptance of a great man's philosophy and a singing in the heart as of music born within, that man or woman is indeed dead to life and truth." 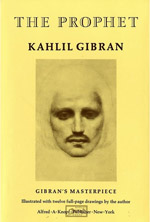 back to The Prophet main page
back to main page